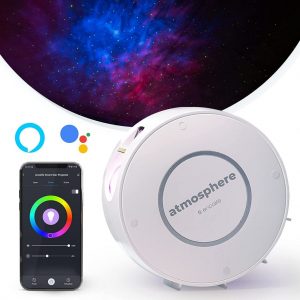 The encalife Atmosphere Smart Galaxy Projector is a starry sky projector that visually resembles a classic LED star/galaxy projector. According to the manufacturer’s website, it is written that the projector can be set up in a few seconds. Moreover, it is supposed to be able to quickly change the mood as well as the color of any room.

To what extent this is true, I will try to examine in the following test report.

First of all, I have to tell you that I received the encalife Atmosphere Smart Galaxy Projector for free as a test product from the manufacturer. Nevertheless, I approached the test completely objectively and evaluated the star projector as honestly as possible. 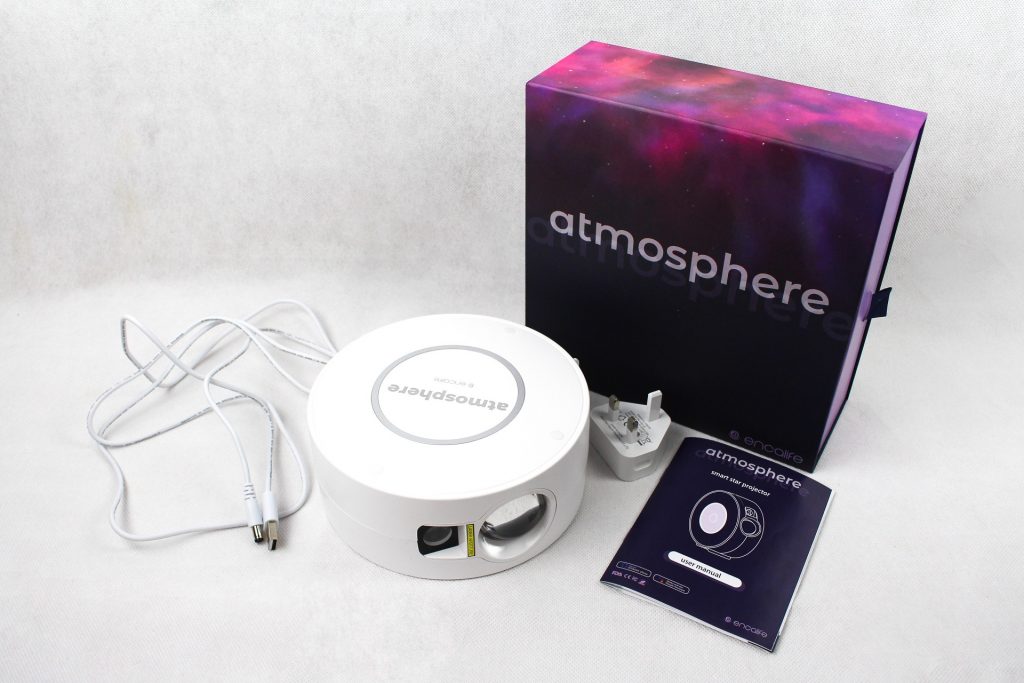 The encalife Atmosphere is delivered in a respectably printed, very high-quality-looking cardboard box. A projection is printed on it, as well as the name of the device and the brand. The box includes an English instruction manual, the starry sky projector, a 1.80 meter USB cable with a connector for the projector, and a power adapter. 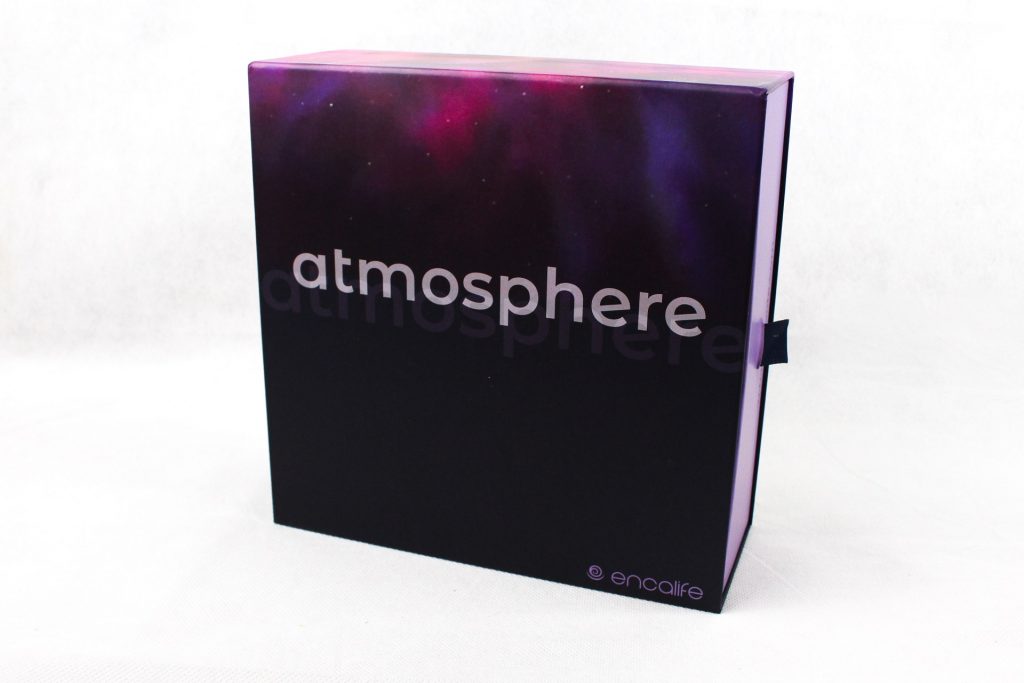 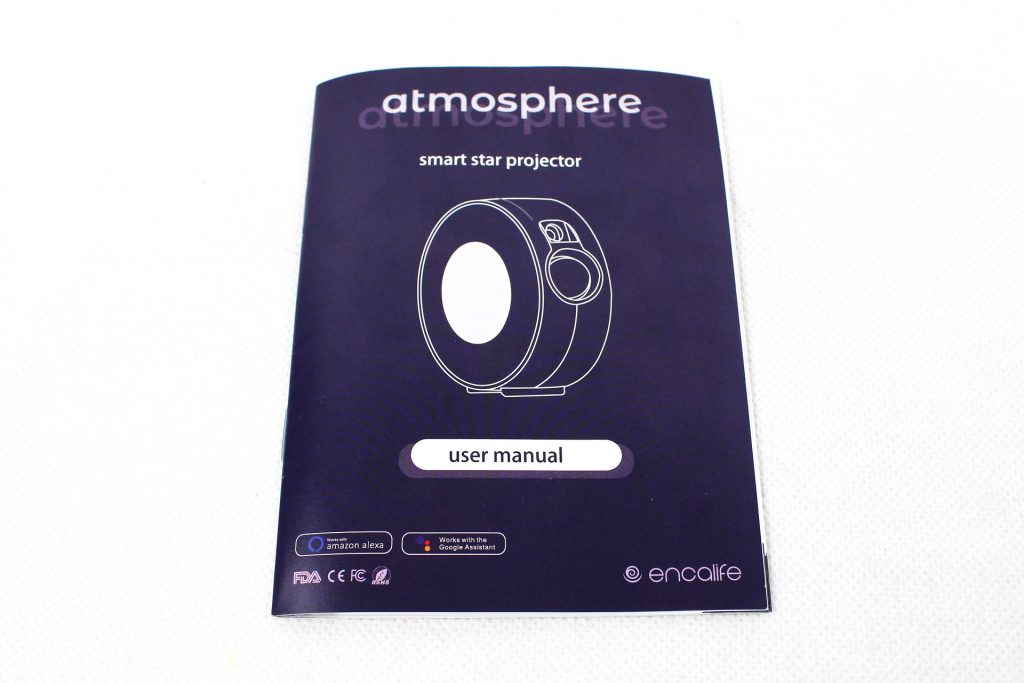 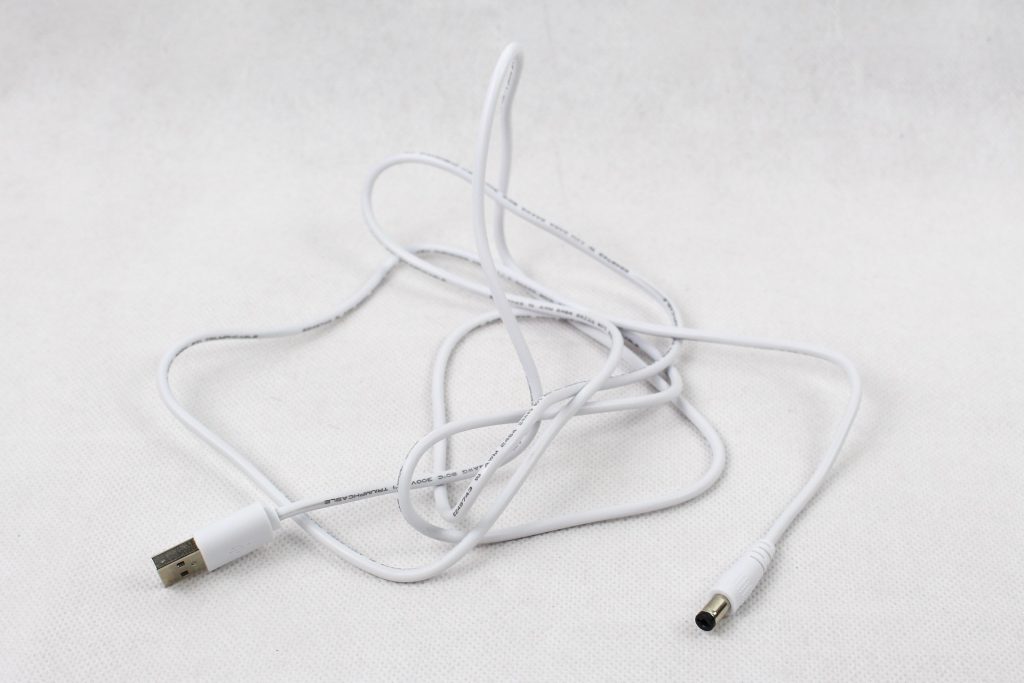 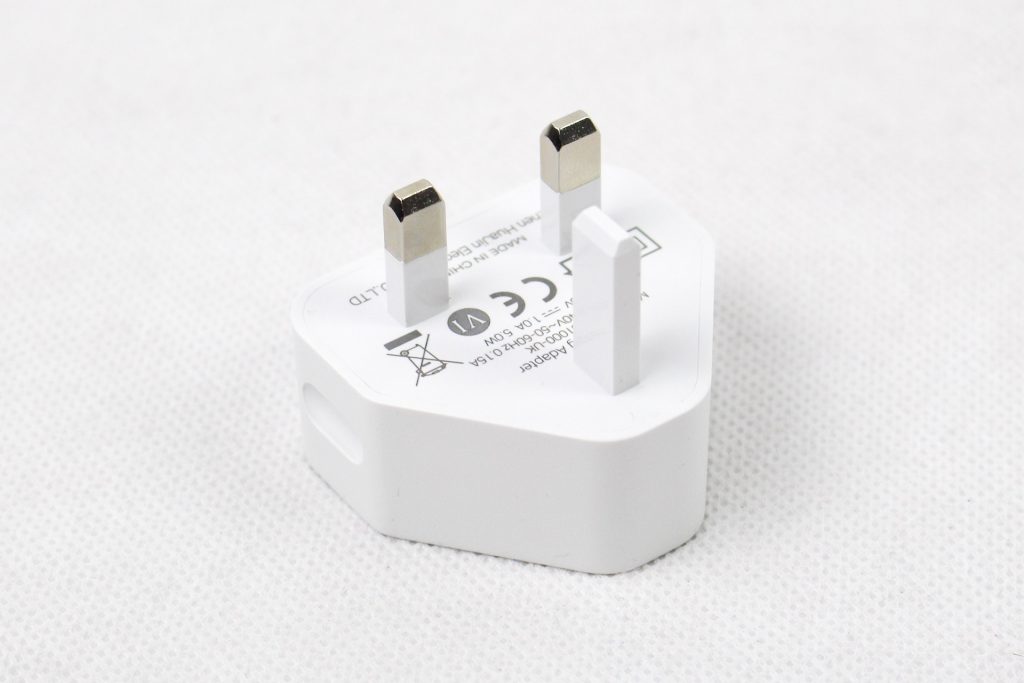 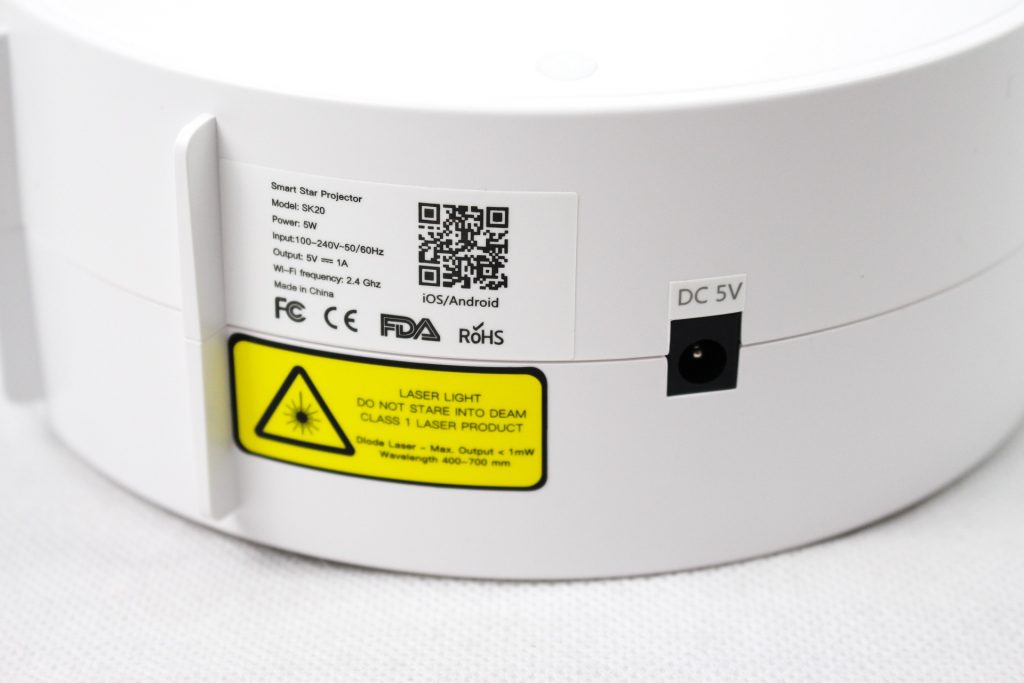 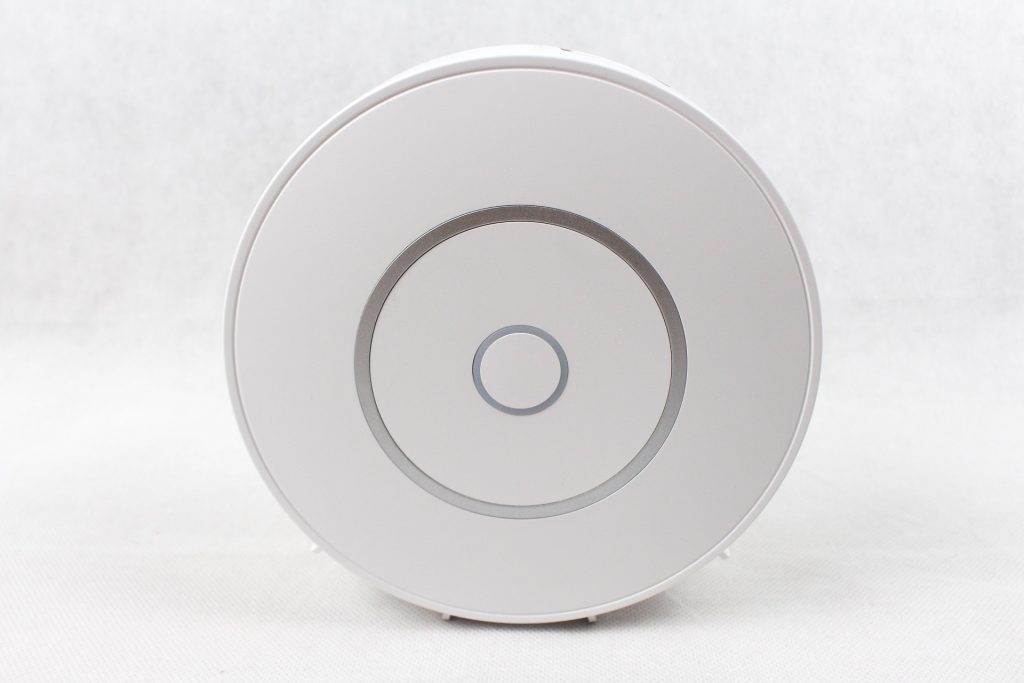 I was able to understand the encalife Atmosphere’s user manual very well and just as quickly. At first glance, setting up the device seems very simple:

However, the last step is divided into several sub-steps. On the one hand, the connection can be established via Bluetooth. There are also different variants available for the connection. In both cases, a cell phone and a special app are needed.

On the other hand, a connection via WIFI is possible. I opted for this variant. The setup took only a few minutes.

The manual also describes how the device can be connected to Alexa and the like. This is also as uncomplicated as the actual setup.

The device can also be used without Wi-Fi and a cell phone. In that case, the setup only takes a few seconds. That is also how the manufacturer described it. I would still recommend using the app since it offers many more settings.

To explain the functionality of the encalife Atmosphere Smart Galaxy Projector, I would first like to describe the device’s structure briefly. The atmosphere consists of a laser as well as a light projector. The laser always glows green, while the light can take on all sorts of colors.

Furthermore, the starry sky projector has only one button. Depending on how many times it is pressed, the device performs one of the following actions:

The app control, on the other hand, offers considerably more functions. For example, the color of the light can be freely set here. According to encalife, a total of more than 16 million color variants should be adjustable.

I noticed very positively that no noise is heard during the rotation. Normally, you always hear slight motor noises with projectors like this.

I also like the fact that the brightness of the projection can be adjusted. This applies to both the laser and the colored light. Thus, you can adjust the light perfectly for the respective situation.

The so-called scenes are also practical. With these, you can save color changes, light effects, and brightnesses and call them up again later. This means that the starry sky projector does not always have to be reset. This makes using the encalife Atmosphere even more convenient.

But how good is the projection? Personally, I like the projection a lot. As the name of the encalife Atmosphere Smart Galaxy Projector already suggests, stars are not really projected here. Instead, a very atmospheric projection is created, reminiscent of a galaxy. The image of this projection is very sharp and could leave most competitors far behind in this respect.

If you would rather have stars projected, you should look at the other starry sky projectors I tested.

Furthermore, it should be mentioned that the projection angle can be adjusted very well. On the one hand, the projector can be laid flat on its underside. It also has feet along the curve. With the help of these, you can decide how flat or high the projection should shine in the room. 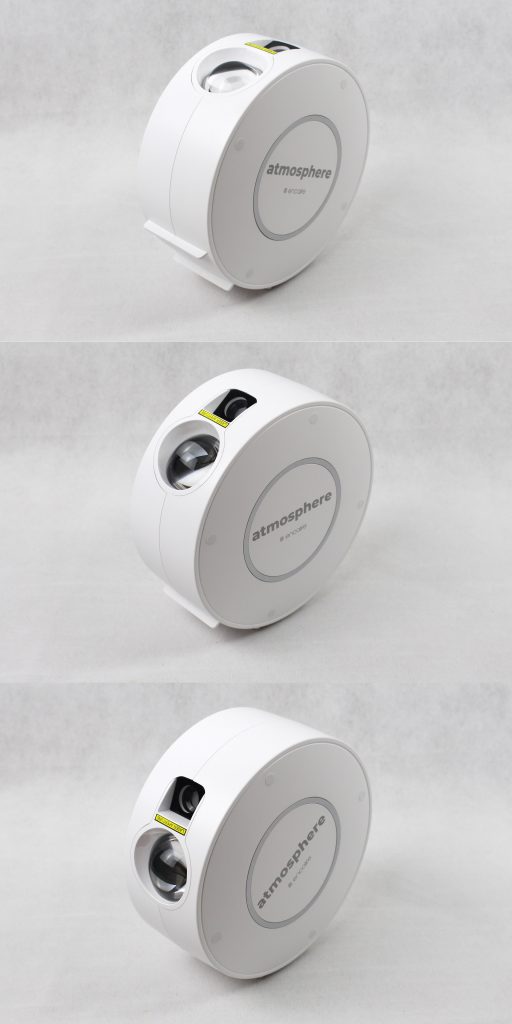 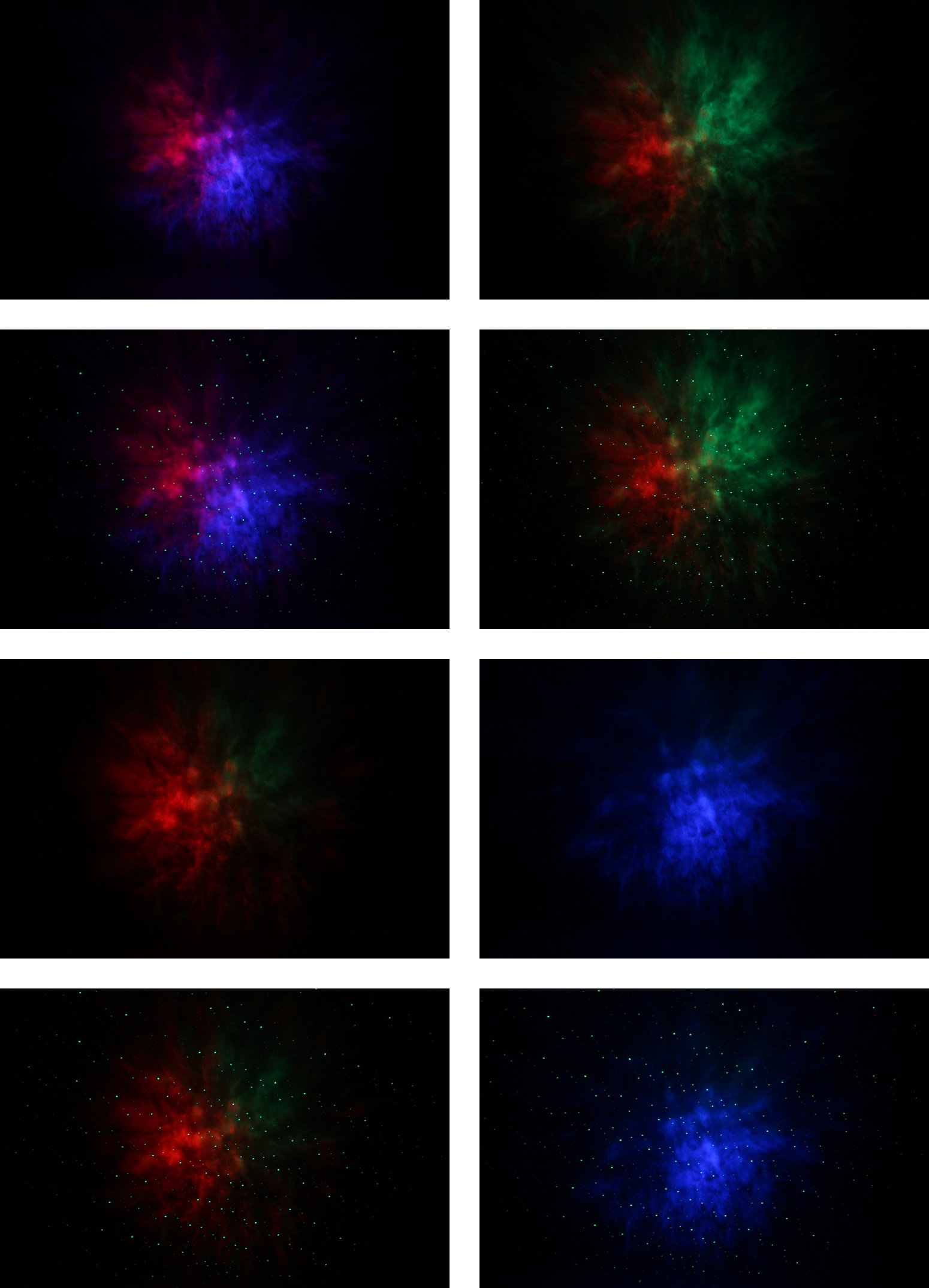 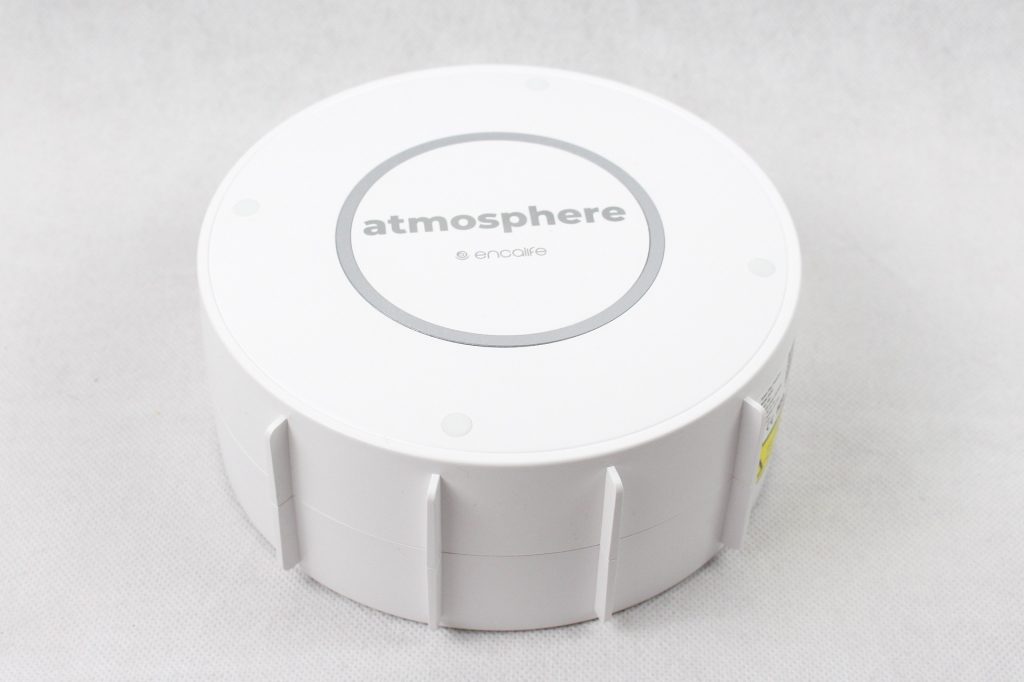 Like other star projectors, the encalife Atmosphere Smart Galaxy Projector is largely made of plastic. Nevertheless, the entire product looks extremely high-quality. It is not light as a feather, but not too heavy either. Nevertheless, it makes a stable impression. Moreover, the workmanship does not only look very high quality at first glance.

I could not find any information about the warranty on encalife. I find that a bit unfortunate – especially because of the quite high price of the product. However, the manufacturer grants a 30-day return policy. If you don’t like the projector, you can return it up to 30 days after purchase.

In my experience, encalife’s service is very good. I have always received an answer to my email inquiries within a few hours. However, it is advisable to have some knowledge of English.

As described initially, I received the Atmosphere Smart Galaxy Projector free of charge from encalife for the test. The MSRP is $199.97, according to the manufacturer’s website. Most of the time, however, there is a discount of about 50%. Thus, you effectively pay $99.97 for the device. This is also the price on Amazon.

The discounts on the manufacturer’s site are often displayed with a randomly long, expiring timer. You should not be put off by this, since the discount is almost always there. Here I don’t think it’s good that such unserious price tricks are used.

Nevertheless, I would rate the price-performance ratio as “Good”. The projector is definitely one of the most expensive starry sky projectors around. However, the features, quality, and settings justify the high purchase price, in my opinion.

The reasons are simple: Until now, no projection of a starry sky projector has pleased me as much as this model – even if not real stars, but rather galaxies are projected. In addition, there is the high quality of the projector and a simple but very comprehensive control via a smartphone app.

Therefore, I recommend the encalife Atmosphere for anyone who has the necessary budget and is looking for great mood light.

But: If you want to bring the “real” starry sky into your four walls, you should have a look at the products from my home planetarium best list.