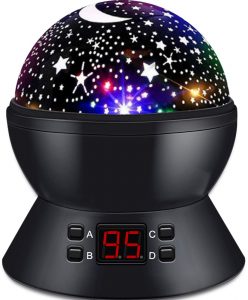 A colorful change of scenery after the room lights are turned off is what awaits people lucky enough to get their hands on this beauty. Upon testing, I was fortunate to be one of those people. This review will present the excellent parts of this lamp, as well as its shortcomings. Let’s take a look at its essential details and its duality as a multicolor lamp and as a star projector for adults. 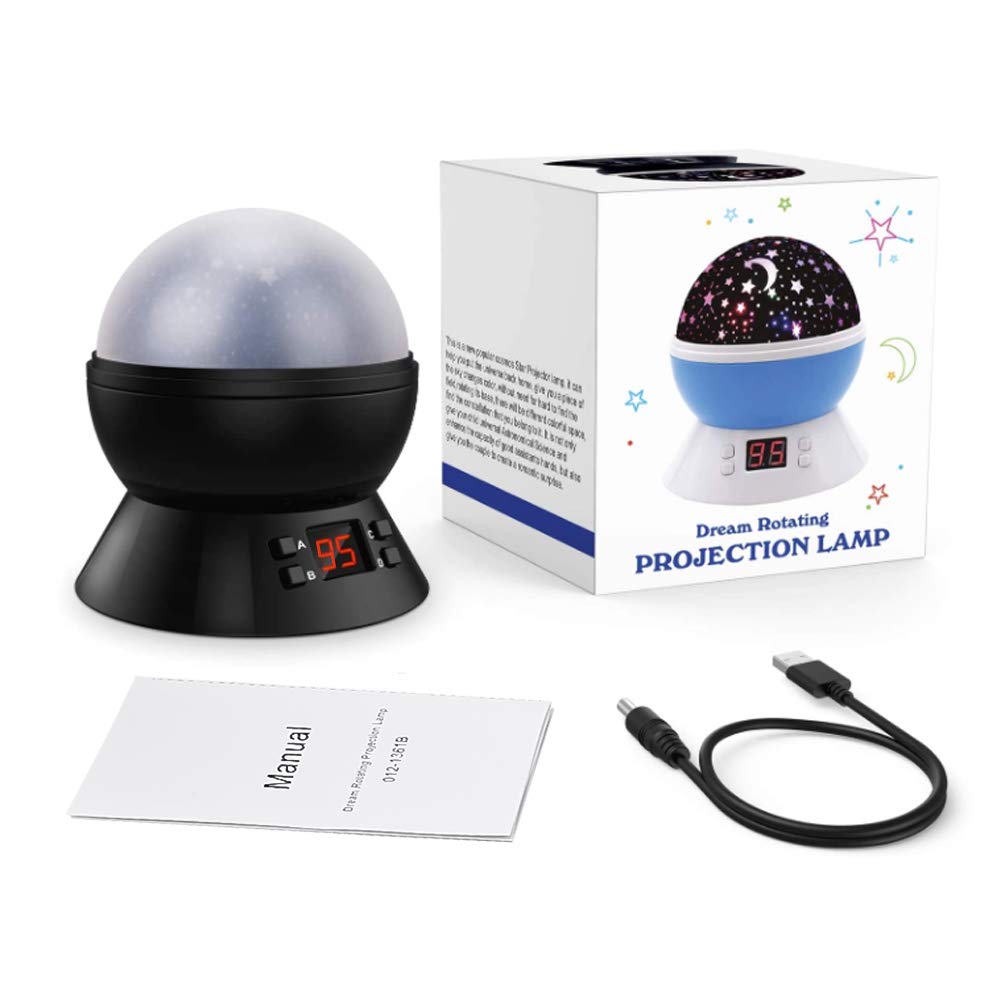 The product is enclosed in a small box, equipped with the star sky night light itself along with a USB cable (59 inches long) and its instruction manual. Batteries, however, are not included. Nevertheless, it is beneficial to have the instruction manual enclosed for a smooth operation. It saved me time and frustration.

Four individual batteries (AAA type) are needed to be able to start the lamp. Open the battery compartment and insert them. From there, choose a time duration between five minutes to an hour to set the timer in motion. Moreso, this device is grounded in convenience. One can simply directly plug in a five-volt power supply as an alternative to batteries using the USB cord provided. However, it does not come with the package. The start-up is relatively easy to operate.

This product serves as a star projector and a night light at the same time. There are four operating buttons: A, B, C, and D. The A button allows users to set the time of how long the operation takes, depending on their preferences. On the other hand, the B button is used to rotate, and the C button converts the color into starry skies, having the options of monochromatic shades or colorful hues. The D button, as opposed to the three mentioned earlier, is used to convert the device into a night lamp.

The A button should be pressed first to set the time for the other buttons to work. It serves as the gateway for the operation of the other controls because it will tell the device how much longer it should stay on. Users need to remember this, or they might think that the light does not work.

The LED lamp can project colors such as red, green, blue, and warm white. The device is small, so it can be brought anywhere without weighing too much after a period of time holding it. When switched to the star projector feature, the whole room is filled with a variety of stars with different colors, allowing it to fill a large bedroom.

It can be operated through batteries or a USB cord. However, the length of the cord is small and needs considerable distance to the power socket. There is also a time limit of 95 minutes, limiting those who want the comfort of a night light or the stars for a long time while sleeping.

The night light is relaxing, but the combination of the colors as a star projector is distracting to the eye, for me at least. The timer, on the other hand, is convenient wherein it can shut itself off after a person has fallen sound asleep to save power. 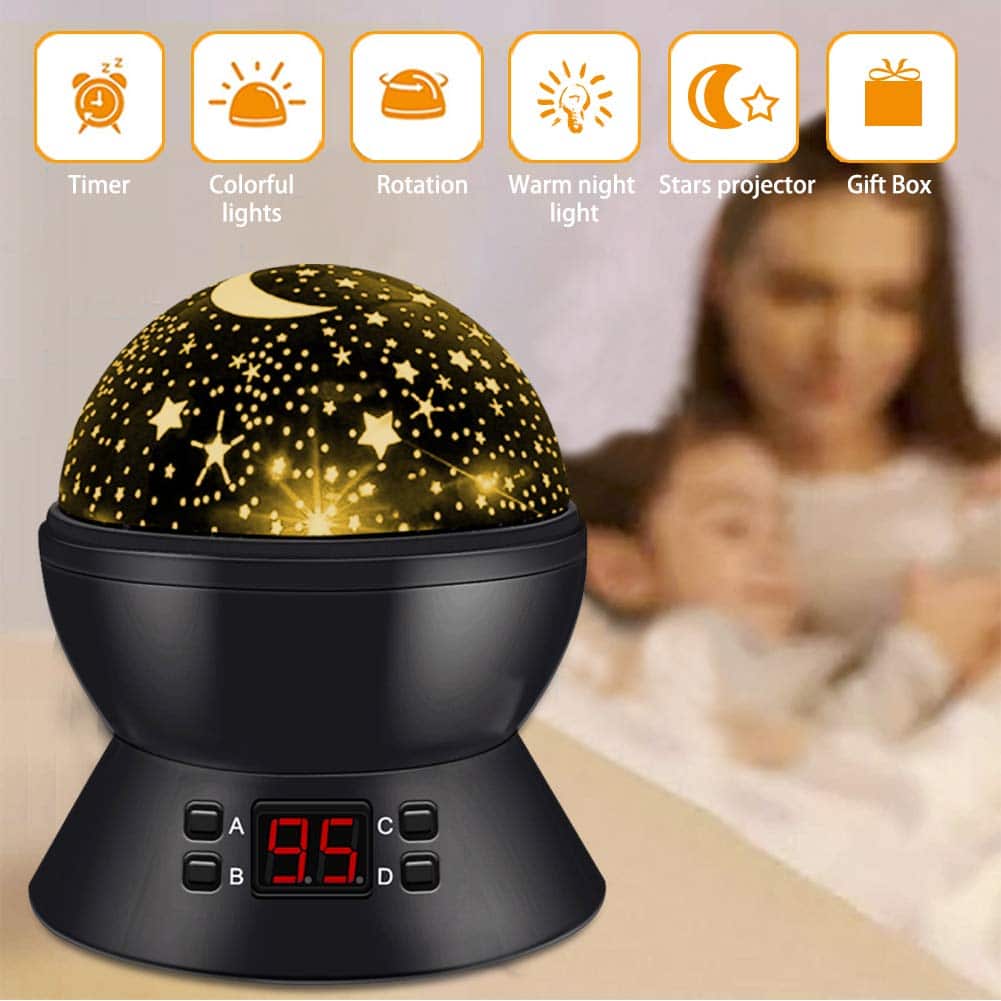 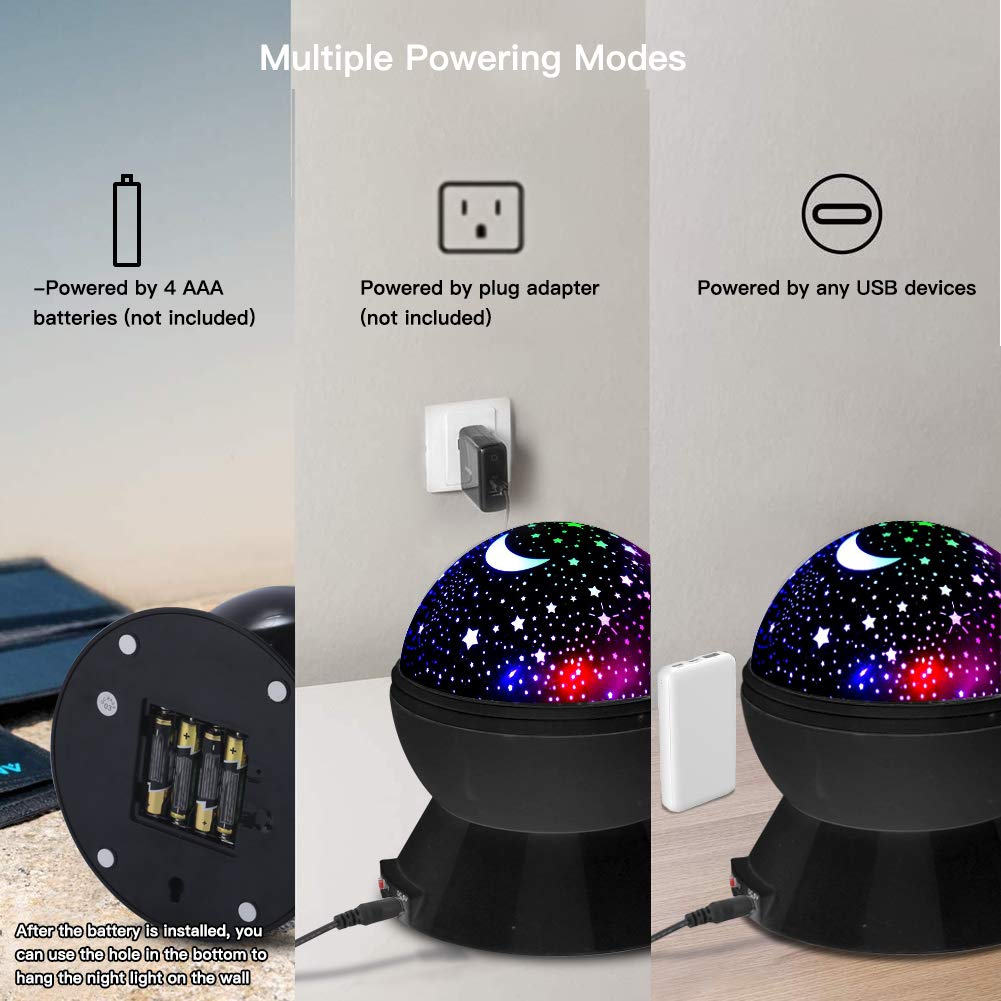 The product looks durable in its appearance but is quite small when it comes to size. The material of the black globe is made of plastic. It is also thin and can easily crack when tipped over. For clumsy people in the dark, it might not hold. On the other hand, the light does not heat up at all, unlike other battery-operated or USB-powered lights. The view that it emits is bright, but the stars it projects are a bit blurry. The device, as a whole, is lightweight and easy to use.

The  ANTEQI Star Sky Night Lamp does not have a set guarantee or warranty labeled in its description. However, when buying it from an online distributor like Amazon, there is usually a 14-day warranty as an online product. Customers can contact Amazon for any questions or complications with the product. Other than that, the product does not pose much in service.

Compared to the other products, one can get his/her money’s worth with this. For its price, it works better than is expected. It is small but puts on a good light. Projector performance is of higher quality than that of its price. I will have to rate it in the margin of very good. It is multifunctional and has a time setting. I don’t think people can get that from other products at the same price.

Buyers can get two products in one with the ANTEQI Star Sky Night Lamp. This device can serve as both a night light and a star projector. For adults, this is very efficient and convenient at the same time. It is easy to use and is enclosed with a power cord and an instruction manual that provides a step-by-step guide on how to put the lamp together and how to operate it.

The plastic material’s durability is a bit questionable, but, all in all, the quality is good. It is a good catch for its price but does not really say much for customer service. Like any other product, it has its advantages and disadvantages. In summary, however, it is pretty good for a star projector and a night light.